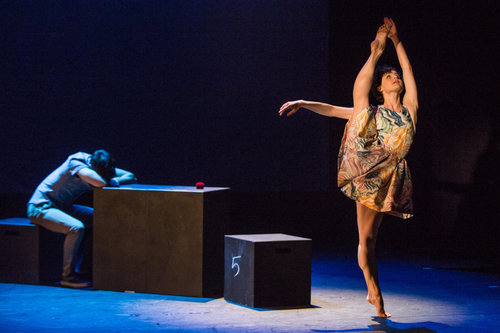 I had a crush on “Freddie Falls in Love” back during its initial run at Signature Theatre.  In 2016, I fell head over heels for this joyful, honest, vulnerable, pedestrian, comedic dance narrative choreographed by “millennial Gene Kelly,” Al Blackstone.  Upon the announcement that “Freddie” would join the Joyce Theater’s 2019 season, I was simultaneously overjoyed and apprehensive. How could this bubbly eccentric style translate to the formality of the Joyce Theater?  How could Blackstone and a cast of primarily new dancers breathe fresh life into the show three years later? And how would audiences—both old and new—engage with “Freddie” today?

“Freddie Falls in Love” is, at heart (pun intended), a familiar tale.  Our lead dude suffers a traumatic breakup and, with the help of his two best friends, embarks on a Pippin-esque journey to find new meaning in his life. We travel with our guy on his quest through the stages of grief…Drinking himself into denial, fighting his evil ex in a video game that magically comes to life, losing himself in countless one night stands, escaping his problems by flying to Paris, and finally(!) finding acceptance in the present and hope and happiness for his future.

Knowing the surprise ending of “Freddie Falls in Love”, I was expecting an experience like when you first reread the Harry Potter books and discovered all of J.K. Rowling’s clever glimmers of insight she so carefully scattered along the way.  Yes, many of my memories of “Freddie” were still there—a mixtape that just makes you beam, Melanie Moore’s sincere acting coupled with impeccable virtuosic technical execution, Matt Doyle’s endearing boyish charm, choreography that looks and seems to feel so good that it makes you want to jump on stage and join in, and the most crazy-amazing Parisian club scene (if that club exists, I need to go there).  What was missing, though, was the drive of the narrative and the seamless spark of magic that should’ve tied it all together.

Despite this hiccup (which, honestly, might not come across to audiences new to the show), “Freddie” still feels deliciously heartwarming and surprisingly innovative. Blackstone and a cast of extraordinarily versatile dancers fuse different dance styles (and even eras) in such an organic and honest way.  Whether contemporary, heels, partnering, or classic jazz, Blackstone’s approach uses movement–from whatever genre–to best tell the story. The concept of a dance narrative is not necessarily groundbreaking (you could consider ballet to be a dance narrative), but Blackstone makes it feel intimate and exciting.

While the Joyce and other presenting theaters often commission work by choreographers like Al Blackstone, the majority of their seasons consist of dance companies performing rotating repertoire.  Even though “Freddie” was not a world premiere, Blackstone still only had about a month of rehearsal to dive back into the show with a new cast and a new (perhaps daunting) venue. It’s interesting to wonder if the lines of concert or commercial dance are swapped in this case. Typically, big ballet and modern companies draw audiences back to the Joyce.  “Freddie,” on the other hand, is a bit of a gamble. How can concert or commercial dance cross to the “other side” if the infrastructures for those respective worlds (companies rehearse year-round while theater productions as short and intensive a rehearsal process as possible) remain relatively unchanged?

I truly believe in “Freddie,” but felt like the revival mainly remounted “what worked” in 2016.  Where a concert piece might take many months to workshop, in this case, it feels as if the commission of an existing work and the deadline of opening night hindered the show’s opportunity to explore and experiment the essence that once made “Freddie” so effervescent.

I do still have a little thing for “Freddie.”  I think I always will.

iThere are no comments

Begin typing your search above and press return to search. Press Esc to cancel.